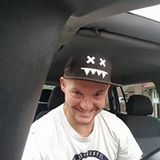 Dj.Valdie-P real name Waldemar Pasiek born 02/18/1981 in Kowary. A native of Breslau, now living in Britain. His adventure with deejaying started in the 90's, disco atmosphere. Art was learning the same mixing observing the best. In the years 1991-1997 fascination with electronic music (jungle), rave, happy hardcore, tech-step .... The fascination of Music Drum N Bass and its variations (neurofunk) began in 1995-1997 when the tape fell into the hands of Photek, , Modus operandi,, Since then, Drum N Bass plays an important role in his life ... I cooperate with Pawel Cymer aka Clicker with Marcin Liss aka HASH-R where this resulted in a hip hop production WudoeRdoCe,, Wroclawskie Townhouses, and electronic design Sakalava Rail (2001-2003).
Founder Group: PODROZ DO WNETRZA DZWIEKU / JOURNEY TO THE CENTER OF THE SOUND via Facebook. In the future, would like to create your own pieces and productions.