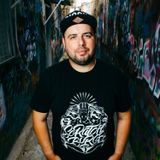 DJ Vadim Poplavsky (Dj Popalova) began his musical career in 2009 when he bought a turntable, mixer and records and started scratching them just like he saw on TV. Graduate of the Yoav Gera Sound School.

He is very well known in the Tel Aviv / Israeli hip hop scene thanks to his performance with many famous Israeli rappers, including: Ravid Plotnik (Nechi Nech), Shabak S., Shachak, Teddy Neguse,Lukach, Z.K., and T.O.B.

In 2017 he also appeared on the main stage of the Menashe Forests Festival along with Kosha Dillz. In addition, as a DJ in the popular Israeli reality show "The Next Star 2020", he accompanied the singer Ron Peretz.