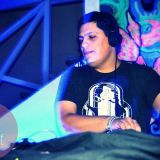 Never miss another
show from unretro

Unretro is Miguel Letria from Portugal. Having been a music enthusiast his whole life, his view of it as a way of life was drastically changed after his first visit to a Psychedelic Trance party in 2004. Years of practice and learning led to Miguel finally taking the music out of his home in 2010, playing ocasionally in small clubs or in private parties for friends. In 2012 he joined together with another DJ -Valac- and formed Frostbite www.soundcloud.com/frostbitepsy, to an astounding success, having shared stages with international artists such as Vibe Tribe, Talamasca, Lost & Found or Bizzare Contact. Miguel also achieved a personal goal securing a slot in Freedom Festival 2013.
For his solo project, his DJ sets are usually night time oriented, influenced by artists such Painkiller, Bliss, A-Team, Biogenesis, Lost & Found, Digital Talk or Abomination. With an energetic set filled with no holds-barred music and a dash of humour, expect a powerful performance from Unretro.