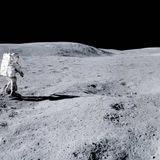 I suddenly became strangely inebriated. The external world became changed as in a dream. Objects appeared to gain in relief; they assumed unusual dimensions; and colours became more glowing. Even self-perception and the sense of time were changed. When the eyes were closed, coloured pictures flashed past in a quickly changing kaleidoscope. After a few hours, the not unpleasant inebriation, which had been experienced whilst I was fully conscious, disappeared. What had caused this condition?