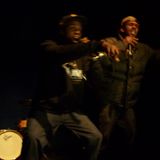 Never miss another
show from Tre'Barz

The name Tre' speaks for itself: It’s his first, middle and last letters in his name. Hailing from Queens, N.Y, Tre'Barz (Tyrelle Scott) has been involved with music as a young child since the early 90's. Joining forces with P.M.C. (Playas Makin Cream) Entertainment,he enjoyed his musical success while throwing events and performing at them until the group separated in 2003. Tre' then took his style and focused on the party audience of the game. Now you can hear him making song after song with DarkKnoizeEnt. http://www.daknoize.com/tre_barz_a.html since joining in 2010. Tre'Barz Has Done Collaborations with Genese, Syckle, F.L (Fast Lyfe), E.VoCalz and other various artists

3rd MixTape "The Engine That Could" Available Now!!! http://daknoize.com