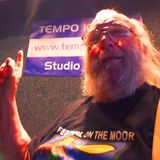 Tony has had a passion for folk music and song as a performer, radio programme presenter, listener and writer for more than 60 years.

FAB concentrates on artists from or appearing in North Yorkshire, first and foremost.

FAB Folk and Blues was nominated for a Yorkshire Gig Guide Media Award in 2016, 2017 and 2018, and has been nominated for the 2018 Laurel Canyon Music Radio Show of the Year Awards.

Tony was given the 'Folk Ariound The Room'' Lifetime Award for Services to Music in 2021.

He is still intent on getting the best out of life while it's still available.
He's half way through a second or third childhood, old enough to know better, but too young to care.

FAB Folk and Blues has recently been rebranded as 'Folk and Beyond' to reflect the widening definition of 'folk song'.