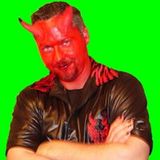 As founder and sole resident of the celebrated monthly event Strangelove, Tomas Diablo has breathed new life into the San Francisco goth scene. His meticulously-crafted sets of goth, industrial, electro, and new wave always pack the dancefloor and energize the crowd. He is also a resident DJ at Bondage-a-Go-Go, San Francisco's longest running weekly dance event, where he mixes rock, pop, and electro into the darker fare. Refusing to be pigeon-holed into one range of music, Tomas ran the event 'Rock This Town' for 3 years, where he invited other DJs to join him in playing anything that they wouldn't normally be allowed to play. Tomas Diablo has opened for artists like Gary Numan, Peter Hook (of Joy Division and New Order), Recoil (Alan Wilder of Depeche Mode), Lords of Acid, and Meat Beat Manifesto, and often guests at various events around the Bay Area.