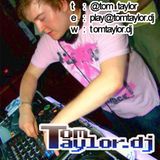 Tom Taylor is one of the many well known DJ acts to come from Cheshire in the North West of the UK!

Worked alongside some of the biggest DJs in the industry such as Judge Jules, Tidy Boys, Matt Hardwick, Mark H, and many others from the Northwest like Anton Powers and Lee Butler.

Having spun his unique style of HOUSE/BEATS/BASS/DUBSTEP mashups in bars and clubs across the UK, 2014 will see the release of his new EP and tracks