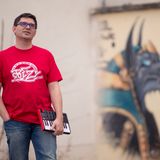 Behind the music episode 442 Jmt-Prod ft. Mawkley on AVA LIVE RADIO for Al HALABAN IN FULL
by Tola Jean Marc

BIOGRAPHY OF JEANS MARC TOLA as told "JMT-PROD"
Born in Marseille in 1969.
Jean Marc Tola was influenced by groups as “IAM”, “Massilia Sound System”, “Assassin”, “NTM”, “Wu Tang Clan”, ”KRS One”, “Public Enemy” and so many others a lot.
He discovered the computing in 1981 and began the Computer Aided Music (CAM) in 1987 with his first Amiga and a basic sound card.
By means of Sampling, Time Streching, and Pitching thousands of sounds and after years of compositions, he forms his first group (La cinquième colonne) in Vienne in Isère.
In 1996 They take out their first album " Colonne V " followed one year later of a new album: " Des mots... ". After several years of scenes, repetitions of Studio, the members of the group decide by mutual agreement to leave towards other projects.
That push him to make new meetings and to have several collaborations with Groups of the area (Karukera-Kylla, Ethos, New Jack Swing, Akim).