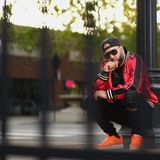 Never miss another
show from therealdjdips

DJ Dips is the 2015 Brit Asia Awards Best DJ winner. With over a decade of experience in the music and roadshow circuit, he makes a conscious effort to create a fresh and unique sound. With several chart toppers and dance anthems under his belt, he knows what it takes to entertain a crowd.

As a music producer he was part of hit collective Ominous DJs, releasing 'Best Kept Secret' album in 2003 and then 'Unfinished Business' three years later. 2009 saw the release of his first solo album - 'Stand Up Vol. 1' which gave bhangra fans the number one track 'Gera De De', featuring Kaka Bhaniawala, Lehmber and Miss Pooja. The release of the album was followed up with a number of smash-hit singles including 'Din Raat' and 'Tohar' featuring Garry Sandhu which have topped 8 million views on Youtube collectively. Dips has also released a number of tracks with Nirmal and Nav Sidhu, H-Dhami, Juggy D, Inderjit Nikku and Roachkilla