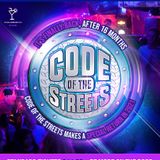 Hip-Hop, Rare Groves Old School, R’n’B and Dancehall are his music preference. With his popularity locally, promoters book him for events and consultancy roles, due to his knowledge of the industry. He has organise charity nights for Save the Children, Oxfam and local projects.

Over the last 32 years the Ledge has been an instrumental part of establishing the Hip-Hop R’n’B scene in Bristol. As well as organising and promoting club nights, Code of the Streets start as a mixtape now has grown to a radio show as well as club night. DJ Style presents on Ujima Radio 98fm Sat 8pm-10pm & BBC Radio Bristol Sun 6pm-10pm. For events, DJ bookings, interviews radio promo contact djstyle@ujimaradio.com