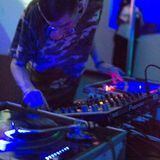 what can i say i lived a really unusual life...r.i.p. too my mom of brain cancer..i basically raised myself ..but on the real i wouldn't have it any other way.......i am married to my music! Born in Las Vegas, raised in Alhambra, The Disciple was brought up from the age of 12 on a strict regimen of breakdancing, hardcore, and jungle music. He began his career as a DJ at the turn of the millenium, cutting his teeth on hardcore before moving into the world of junglism. He began producing in 2003, After multiple releases on Good Fortune, including heaters such as "Soundboy Dead", "Save Dem Breath", and "Suicide Life", he was picked up by N2O Records and Big Cat in 2005, banging out original tracks and collaborations with artists such as B-Boy 3000 (aka jungle legend R.A.W.), Livewire, and General Malice. His career has produced over a dozen hard hitting vinyl releases with distribution all over the world, helping to form and define what this is all about!