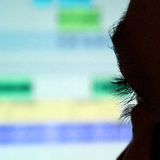 Arno started tape music in the early '80's and evolved to electronic music. First as the EBM-duo Voltage Control (2 EP's and one CD-album on Antler) and later as one of the first techno-artists in The Netherlands with some EP's on Djax-Up-Beats, as part of Random XS and Urban Electro and solo as Spasms. He turned away from techno to more experiMental stuff on his album 'Fuzzy Logic' and migrated to the German Mille Plateaux-label which released the award-winning AeroSon and two tracks on compilations.
He has worked for Dutch National Radio since 1997, both as engineer and producer for programs like Supplement, Blackbox and Folio.
With his the one-man company (Tape TV Productions) he is editing, mixing and mastering all kinds of projects from the no-budget fine art to the high profile and the cutting edge. Also he works as an media-educator and together with Iris Honderdos as a community artist worldwide.