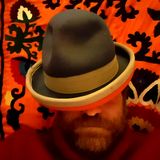 Never miss another
show from Süperfly

Psychedelic Roll On Volume 2
by Süperfly

Grown up in two funky towns - Munich and Istanbul -, Süperfly explores the deepless deeps of Norientalism. Constantly crossing the borders of cultural, ethnical, geographcal, chronological and fictional regions and musical genres, his aim is to deconstruct the mighty dominance of identity concepts in dance music.
That's why he focusses on the east and the south as an eruptuous impact area, from where he sends infectual waves through the doors of western self- and male-centredness in arts, culture and music.
Süperfly juggles through a lot of genres. A few to mention: Turkish Psych, Electronica, Originals, Mash Ups, Remixes, Edits of old and new classic mediterreanean hits from countries like Greece, Israel, Turkey, but also near eastern and arabian Music from Syria, Irak, Algeria, Egypt etc. merging with Electro Funk, Afro and Latin Grooves and of course heart melting love songs from all over the world.