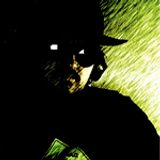 Never miss another
show from The Stranger

It was a typical day in physics class at Point Cordial High when things took a turn.. to the atypical! Mild-mannered Breshvic's seething distaste of physics broke its last tensile straw as the very fabric of spacetime holding him in place tore like the flimsy wet blouse of a porn artist! Young Breshvic found himself disembodied, floating wildly with no shape or form! Had he gone to that ethereal void of wraiths & gods? Had he crossed over to the land of dead? HAD HE GONE UTTERLY MAD? NO! It was in this astral plane between reality & dream, nexus of dimension, the OMNIVERSE, that he learned to use his powers, clawing madly to survive against nightmarish demons & malevolent cosmic shadows!

Each week he staves off the evil & stale with the fresh & weird on mutinyradio.org The oddest topics, most multifarious (multifaceted+nefarious) tunes & newly-lacquered commentary on The Stranger in a Strange Land! Stay tuned for more adjectives!

Oh, and I'm not a werewolf. Just to be clear on that.