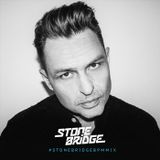 Never miss another
show from StoneBridge

Since tapping into the musical mainstream with his remix work for artists such as Robin S, Sia, Usher, Missy Elliott, Taio Cruz and Ne-Yo GRAMMY Award nominated Artist, Producer and DJ StoneBridge has not slowed down.

StoneBridge has been rocking sets all around the world on the highly successful Hedkandi 20th Anniversary tour, headlining the Sunsetter Festival in New Zealand.