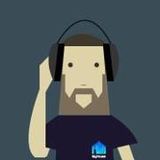 Stevie Dee started mixing in 1995, mashing up Jungle and Drum & Bass, but has really found his passion in Deep & Progressive House. Stevie has thrown many parties under his ‘MyHouse’ banner and been venue host to Wimbledon’s flagship and quirky late night venue – Sia. Stevie’s residency for South London’s very first Sunday party ‘Sundazed’ at The Whitehouse took him to Pacha, The Egg, Hidden, The Cross, Turmills and Factor - not to mention international gigs in Ibiza, Poland, Cape Town and Amsterdam. Stevie gets involved in some interesting collaborations including one of the most dynamic, word of mouth warehouse parties to hit London – ‘PlasteredCard’ and the Cape Town club tour – ‘Global Breakthrough’ mixing UK DJ's and Producers such as Mark Knight with the likes of Goldfish and Dean Fuel in some of the finest locations the Cape has to offer. These days you will find him hosting ‘MyHouse-Sessions', in the Flight FM studio or at home playing the whole spectrum of House old and new.