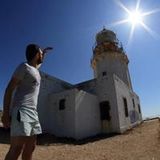 Never miss another
show from Foti

House music to me is about hope, peace, life and love.

It's been 14 years since the true House sound that grew from the roots of Soul and Disco in Chicago and New York came into my life and I decided to invest my time in collecting and immersing myself in this music and it's message.

A few of the legends whose music has influenced me the most are David Morales, Frankie Knuckles, Louie Vega, DJ Spen, Blaze, Joe Claussell and Timmy Regisford.

House music has left a life changing positive imprint on my soul and has led to many new friendships being formed. I hope to share this music and hope it continues to have a positive influence on others.

From One Day To The Next