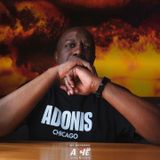 Maybe you never heard of New York DJ Stan Williams just yet. But he has been living in Russia for many years creating radio shows while touring internationally and producing all over Russia. Stan Williams stayed in Russia to handle his music projects from Moscow because of family roots. Playing Moscow’s legendary clubs Ketchup, Fantomas, Garage, Duran Bar, Pacha, Alpha Future People, and others. He’s one of the pioneers of the house music scene in New York and decided to do clubbing the same here in Russia. Stan Williams was one of the last resident DJs in legendary New York Studio 54 at age 19. In the early 90’s he was one of the pioneers of the house music scene in NYC and promoting many artists along the way. Working alongside the legends such as Frankie Knuckles, David Morales, Kerri Chandler, Kenny Carpenter, Mark Kamins, Madonna, Moby, Stereo MCs, Lisa Stansfield, and others. Now he is represented by house labels Jango Records (FR) Gysnoize Recordings (IT) and others.