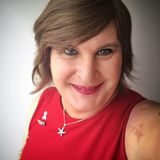 Ex-RAF, motorbike racer, newspaper editor, football & rock photographer, writer, poet, politician, self harm & suicide survivor & transgender.
Sophie Cook became the first trans woman to work in football’s Premier League as club photographer for AFC Bournemouth following her transition in the summer of 2015.
She joined Latest TV in 2016 as newscaster, the first trans woman to do so anywhere in Europe, and presented her own chat show 'Beyond The Rainbow'.
In 2017 she stood in the general election in East Worthing & Shoreham, increasing the Labour vote by 114%, narrowly missing out on becoming the UK’s first transgender MP, for now.
Originally from Bournemouth, Sophie 1st visited Brighton as a 12 year old Mod one bank holiday in the late '70s and immediately fell in love with the city she now calls home.
An avid record (she refuses to call them vinyl) collector, she still owns every LP she's bought since her teens and over the decades her musical taste has become as diverse as her CV.