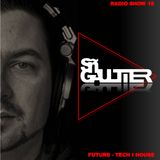 Señor Gaultier was born on February 6th, 1986 at Tongeren.

At the age of 12 he played his first track on his DJ booth in the bedroom.

A few years later he started his DJ career at local events in
Riemst (Limburg).
He did this using the name “DOUBLE U”.

At the age of 16 he learned musical instruments like drums and
percussion.
His love for music was clear now and he decided to make this his profession.
Hardly two years later, he started as All Round – DJ.

In the year 2012, the young DJ became a father.
Because he was so proud of his first son, he decided to continue in the
dj world using the name Señor Gaultier (Sñ Gaultier).

The music he runs under this name is mostly about the house world.
Deep House/Tech House/Nu-Disco/Indie House/House/Techno

At the moment he’s exploring the big scene w