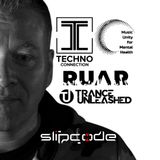 Never miss another
show from s.l.i.p.c.o.d.e.

Slipcode is a Hard Dance, Trance, Techno and House DJ from the UK. Having started off listening to Hip-Hop and Electro whilst at school, slipcode was introduced to electronic sampled music in the late 80's with groups such as Kraftwerk and The Art of Noise being prominent in his playlist.
Being hooked on loops, beats and samples, it was inevitable that slipcode would make his way through the 80's synth beats and into Acid House and dived head first into the 90's Rave scene. Attending infamous events such as Dreamscape, Fantasia, World Dance and Raindance, slipcode was addicted to the thumping bass from huge sound systems along with the never ending energy the DJ's and music provided. Slipcode is old skool through and through with the medals to prove it.
Late 90's and 2000's bought Hard House and Trance to slipcode's attention. Borrowing heavily from the earlier rave scene slipcode immediately felt at home, and his true love of multiple genres was realised.