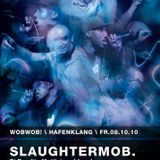 Never miss another
show from slaughtermob

Brought together by a love of the darker side of UKgarage, Slt Mob are made up of DJ Bandit, MC Vicious aka Nyabingi, MC Dangerous aka Gargamel and Silver Fox formerly known as M Double. Having spent years doing the rounds on Y2Kfm, formerly Mission FM and playing in various venues such as Mass, Bagley’s, Stratford Rex, Koko and more recently Plastic People, they have now developed their inimitable skills to produce their unique sound. Spending time in the studio has enabled them to learn and develop the skills needed to produce tracks as a collective and individually – you only have to listen to SilverFox's "Heeby Jeebies”, Vicious and Bandit’s “Strange Tension” or Dangerous’s “Murda” to get a taste of what these heads are capable of.
They were residents at FWD>> night at Plastic People,where they found a home to bring the dastardly S.L.T. sound. A guaranteed show-stopper, never afraid to re-load, we are pure entertainment and pure vibes.