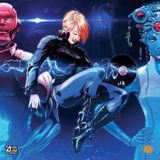 Never miss another
show from Simona Faraone as Pharaoh

Andy On The Radio

Simona Faraone (PHARAOH ) [biography]
Hailing from Rome and Florence based, Simona Faraone is one of the first women to have undertaken the disc-jockey career in Italy and Europe. Refined digger of cutting-edge sounds, she started a long and respected militancy in the Italian underground scene in 1987, with a background deeply rooted in the Afro-American music and an eclectic, original style.
As an activist in the Italian club culture, she's seen the birth and partaken in almost all the electronic music movements: from the seminal house and techno-rave, across the progressive detour, until the manifold forms of contemporary electronica.
In 2015 Simona joined Roots Underground Records as Executive Producer, in partnership with the label founder Marco Celeri, contributing to the launch of the vinyl catalogue.
Her very own project of “Phonographic Editions From Tomorrow’s World” called New Interplanetary Melodies was born in 2016 ...