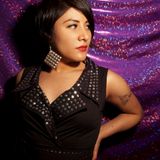 Never miss another
show from shominoise

Shomi Noise is a writer, musician, DJ, storyteller, dreamer, and tinkerer with an established reputation in the Brooklyn underground scene. She uses music to share empowering messages with the world through a creative mix of stories and sounds.

Shomi has DJed nationally and internationally with sets that include a clever mix of genres ranging from Latin dance music, hip-hop, electrohouse, reggae, pop, punk rock etc. She currently produces a Brooklyn party called: Riot Chica, which is a latinx queercore/riot grrrl party that celebrates feminism and DIY culture by sharing empowering underground music made by ladies and queers. She is also the lead singer of Amor Prohibido, a Selena Quintanilla punk tribute band based in Brooklyn.