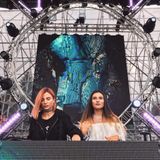 Never miss another
show from Shin'ar

Driven by the love of electronic music, our twin sisters decided to start MA Studio: Dj School in 2015 and to pursue a career in the music industry, thus forming the Shin'ar duo. The name comes from the Sumerian language, meaning "the land of the watchers". The musical genre approached by them is techno, being the only female duo in Romania who promote this style. One of the events they where invited to play was at Arenele Romane alongside Guy J, and also at Noise Festival in Poiana Brasov with several international djs.
They created their own style with a dark and melodic sound through the selection of tracks that they share with the audience. They were also guests at the CrisLab studio live shows over the years and had several gigs alongside other romanian djs.