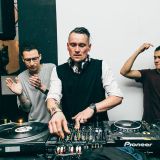 Never miss another
show from Seutek

U ken doorgaan
by Seutek

Rave to the second wave
by Seutek

Seutek; real name Jeroen F. Seuthe was born in 1976 on the first day of April in Duesseldorf, coincidently also the hometown of the legendary electro band Kraftwerk who became very popular and learned to be a great inspiration for Seutek. After 2 years in Germany he moved to Rotterdam in The Netherlands where he grew up to be the succesfull musician he is today. Growing up Seutek already had a major interest in musik particulary electro, rap and hiphop. A couple of years later as a teenager Seutek started spinning vinyls at the tender age of 16 blending old House, Hiphop and Hiphouse records in local venues in his hometown Rotterdam at that time. Going deeper into the music Seutek discovered the early Detroit techno and Chicago house aswell as his fathers old Kraftwerk and Italo collection. Enthousiastic as ever Seutek bought 2 technics turntables and started to experiment with all these different sorts of beats and rhythms creating his own sound and mixing style.