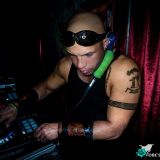 Sean Bassett comes from a long line of Musicians and Artists. His father was the lead guitarist of the Apollo theater back in 1964 through 1969. He also played with The Bo Didley Jr 5 and for a number of stars such as Martha and The Vandalas and Maxine Brown. As a solo artist, he recorded a few singles during the Apollo theater's golden age.

Sean BASS is currently and DJ and producer on the label Shifted Music. He has few projects to be released this year co produced with Grammy nominated artist Jay J.