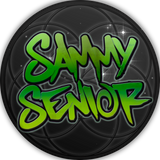 Splice together the DNA of Samuel L. Jackson from Pulp Fiction, Captain Jack Sparrow, Michael Jackson when he was eight, Data from the Goonies and a labrador puppy. Shake well in a soft leather Gucci cowboy boot, pour contents into a petri dish and place in the airing cupboard under the Anne Summers knickers for two weeks. Add a pinch of the cookie monster, two fingers of Dolly Parton and cover generously with the sex musk of Burt Reynolds and you’ll be close to recreating something that resembles Sammy Senior.