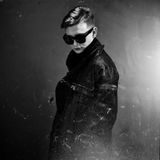 Never miss another
show from Rompasso

Rompasso is a young and talented soundproducer, he created his first viral track “Angetenar” in summer 2016. The single got so huge success that it became a virus and reached over 70 millions views on Youtube.