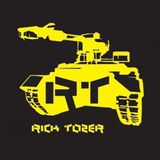 Electrick with The Electrick Allstars - Show 150 Special
by ElectrickReposted

Electrick with The Electrick Allstars - Show 139 - Xmas Special
by ElectrickReposted

29.11.21 These Sounds - Dan The Drum #new
by Totally Wired RadioReposted

Falling in love with music at the dawn of Rave and buying his first set of decks when he was 15 he set about ripping up the local house party scene! Moving to South West London in '95 he began playing regular nights & over the next 5 years had 3 weekly residencies & played on bills alongside the likes of Grooverider, Fabio, Judge Jules, Oakenfold to name a few inc parties at key London clubs. In 2000 Rick set off on travels around the world and on his return in 2002 co-formed the band A.P.E. He left & in '05 & returned to DJing running his own weekly night ‘Revenge Is Sweet’ in central London @ Rudy’s Revenge for 7 years, as well as being Resident/Promoter for one of East London's most popular monthly nights 'This Is Not A Rave'. This lead to many sets at clubs around London inc. The Egg, Club Aquarium and 333. Now he can be heard on his weekly radio show Electrick on Slice.Audio every Friday from 8pm UTC, playing music across all genres of electronica covering the past 30 years