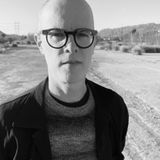 Richard Chartier is a Los Angeles based artist/composer considered one of the key figures in minimalist sound art. Chartier’s works explore the inter-relationships between the spatial nature of sound, silence, focus, perception, and the act of listening.

Chartier's sound works/installations have been presented in galleries and museums internationally and he has performed his work around the world. In 2000 he formed LINE, a label exploring the aesthetics of contemporary minimalism.

Chartier (often as Pinkcourtesyphone) began DJing in 1991. Sets can be an eclectic mix, ranging from mid-20th century analogica, to post punk synth oddities.

Since 2017, Chartier's show 'Between Two Points' has aired on Dublab. explores textures, tones, place, and space, featuring selections of experimental electronic, avant-garde, ambient works from the mid-20th century to now.