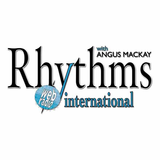 Never miss another
show from rhythmsinternational

In 1986 Rob Braide (then General Manager of MIX96) decided to broadcast a weekly world show called Rhythms International.
A radio institution was born.
Every Sunday night for 19 years Daniel Feist provided the best in global beats.
He interviewed local and international artists, promoted world music concerts and championed the careers of musicians such as Youssou n' Dour, Johnny Clegg and David Rudder.
Fighting (and broadcasting) to the end, Daniel lost his battle with cancer in 2005.
Determined to keep the show on the air Rob appointed reggae authority Richard Lafrance as his successor.
Every Sunday for 3 years Richard and I boomed our tunes through the hall of MIX96.
That all came down with budget restraints that forced Richard to leave until it was decided it would be cancelled.
In 2010 I decided to podcast. With the expertise of my faithful Louis the Techno-Maestro, Rhythms-International.com now offers the best world music you'll find anywhere.
- Angus MacKay