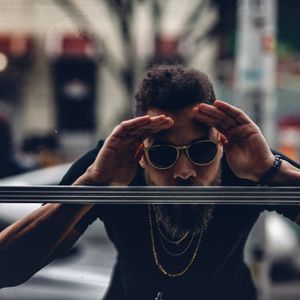 We interviewed drummer, producer & MC Kassa Overall about his latest album "Go Get Ice Cream and Listen to Jazz." The album is a perfect marriage of hip-hop and jazz.

Kassa has collaborated with a formidable list of artists, including Vijay Iyer, Dee Dee Bridgewater, Francis & the Lights, Yoko Ono, Marc Ribot, Mayer Hawthorne, Ravi Coltrane, Gary Bartz, and many more. He spent five years as a key member of pianist Geri Allen’sTimeline band and around a decade with trumpeter Theo Croker, whose album Escape Velocity he co-produced. As a rapper and producer, Overall has collaborated with Das Racist and the duo Peaceful Solutions with Kool A.D. In 2017, he was a DJ onThe Late Show with Stephen Colbert’s house band, Jon Batiste & Stay Human.

“ONE OF THE FEW GENUINE-SOUNDING, FULL SCOPE AMALGAMS OF CONTEMPORARY HIP-HOP AND JAZZ TO SURFACE IN RECENT YEARS.” - GIOVANNI RUSSONELLO, THE NEW YORK TIMES

“THE MOST REFRESHING RELEASE OF THIS YEAR.” - SOUND OPINIONS, WBEZ CHICAGO

Support Rhythm Lab Radio by subscribing directly to this channel and get access to exclusive rewards.