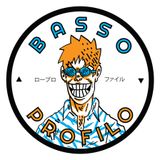 Never miss another
show from realBassoProfilo

BassoProfilo is a Dj and Music Producer based in Barcelona.

Born in Rome, he moved to Barcelona and discovered his passion for music creation and mixing.

Influenced by some of most experienced DJs in the BCN scene, he discovered through time its own style and music, playing in exclusive private parties.

While he prefers to play Tech-House and MicroHouse, he usually builds a climax in order to engage the audience and connect with them.

For this reason, it is not uncommon for him to play some Afro and Ethnic tracks in order to prepare the crowd for more explosive music.

BassoProfilo means in Italian “LowProfile”, and it is a philosophy that is reflected in the way he handles his personal life.

One day, before the concept of BassoProfilo was created, a friend of Basso once said a joke that inspired the artistic name.From that day, it was clear that this name should reflect a life philosophy.

When BassoProfilo does not play, he is usually known to be in the first line of the club in