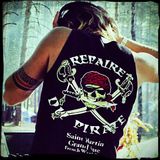 Artem was brought up dedicating his time and interest completely to music. He's been playing the guitar since his early days. He played in 2 rock bands, up to the day when he got in touch with the psychedelic trance music.

In the end of 2003, started to act as a DJ and learn software for producing music.

In 2006 Psart played his first psytrance set at festival Kazantip in Ukraine.

In the start of 2008 joined to professional promo system Multivision. He played at many major parties and festivals in Russia and Ukraine.

In 2011 joined to Goa Freaks Community and played at the famous Goan and Indian clubs and open airs.

In the start of 2014 also joined to Aphid Records label, based in L...