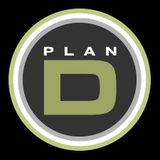 I started mixing tracks back in 2006, mostly to relieve boredom and stress. They didn't go any further than to friends, and a few errant sheep. In 2007 I mixed my first CD-length downtempo session for lounge-radio, and then in 2009 I started performing mixes in bars and clubs, beginning in the realms of electro swing and branching off into house with a funky feel, with the occasional set of good funk/soul, and pieces of everything thrown in.

The PLAN D name was adopted later that year from an in-joke.