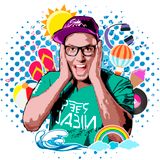 Peter Gyerjabin is a real nighttime horseman, but when it comes to spinning records he doesn’t horse around.
Well back in the XXth century his very first fangirl was his ringneck dove Tubi, who cheerfully sang along with
the tunes that came from little Pete’s cello and saxophone.
Little Pete was just over 14 as he decided to change the way of making music, amusing a much wilder
audience. He became Peter and he started off with playing funky and R’n’B, but then he was swept away
by the waves of vocal- and funkhouse club music. His mixes are startling and amazing but never dull or monotone,
he always maintains the good clubbing vibe with a throbbing rhythm that lures you to the dancefloor.
You can also find some freshened up rock and hip-hop on his track list but every track in the mix has strictly
the maximum of two minutes time to shine.