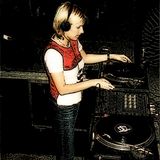 Influenced by the synthie sound of the 80s.
She bought her first Acid/New Beat record with sweet 15.
Working as DJ began at the age of 18, on parties, in different clubs.
She was the first female DJ in her country (she even did not know about it, that was not her purpose to become DJ).

With 20 Peggy learned spinning with turntables. A real passion began.
At 21 she became bored playing Pop, Rock and Dance Music.
For herself she already bought electronic music for a while, but could not play these records in the clubs she was working.
In 1993 she met techno event promoters and same year in October she could play at her very first Techno event.
As House/Techno DJ, Peggy was Resident in different clubs in Luxembourg, Germany and Belgium.