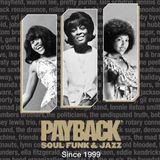 PAYBACK is a long running club night of soul, funk and jazz music with regular D.J's

PAYBACK started in 1999 as a weekly club night at the ROOM nightclub in Hull before moving to it's monthly slot at the Adelphi in September 2002.