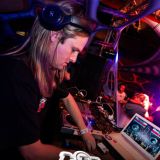 Digital Dream aka Paul Robbertse started producing music when he was just 14 years old. He attended his first Psy Trance party in 1998 and inspired by such mind-blowing music, he started producing his own Psy Trance in 1999. He has been a Psychedelic Warrior ever since.
He started DJing in 2001 at what were the founding psychedelic parties in Joburg. Teknotribe, Mushroom Mafia, Lunertech and Redeye were at the forefront of the psychedelic scene, and Digital Dream was smashing all their dancefloors to smithereenes.
In 2011 he was signed to Zulutunes as one of their first artists on the label. Today, Digital Dream is now one of South Africa's leading Hitech producers. Fusing his intricate knowledge of sound with his classical musical training and guitar-playing, he creates melodic high-energy music that echoes through all corners of the galaxies.