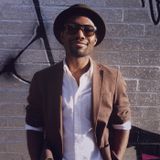 Optimus Funk is a London based selector who regularly surprises both his elders and his peers with musical knowledge beyond his years.
His style blurs the lines between past and present with boogie, disco, modern funk, nu-jazz, and soulful house. Expect to hear a wide range of feel-good classics and forgotten b-sides alongside the latest funk infused jams, influenced by his roots in the underground dance scene.

You can catch Optimus in the wild supporting acts including Nile Rodgers, Bill Brewster, Crazy P, and The London Disco Society; On the airwaves at both Sonic Stream, and Threads Radio, as well as his residencies at Boxpark Croydon, and Jack Solomons Club.