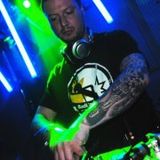 D-FENS discovers electronical music in the early 90's with trance and rave in the club-scene. Soon he starts DJ'ing himself, in the meanwhile he evolves to techno & acid.
In 1995 his first local gigs are a fact. During the years his style evolves more and more to hardtek and in 1999 he decides to create a new sound in the Belgian underground and establishes the "NOISY BASTARDS" parties as a harder alternative to the current scene. Time doesn't stand still and in the years to follow the parties evolve to hardcore and for now industrial core.

In 2007, to maintain the nostalgic feeling he creates a new organisation "ESKADRON" that is more acid/hardtek based.

Being there from the beginning, D-FENS can master and handle all styles, his parties and label promote the harder stuff, but still he is asked to play at house/techno/minimal/electro/acid/retro concepts, both @ venues as respected clubs like Vooruit, H2O and Catacombes, national and international.