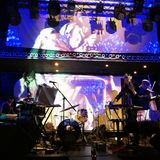 Never miss another
show from neotropic

Last Show for 2022
by neotropic

The Elsewhere on Camp Radio April 2022
by neotropic

The Sound of Music # 27 [La Bande Adhésive]
by Radio MNEReposted

I breathed a sigh of relief/That shook the mountain down”
Riz Maslen has had an extraordinary career so far – playing live at Coachella and the Montreaux Jazz Festival, composing for Kew Gardens and the English National Opera, and releasing work on a who’s who of independent labels including R&S/Apollo, Oxygen Music Works and Ninja Tune.
First marked out as a trip hop artist by critics, Riz Maslen had actually arrived in London from the West Country where she had been playing in several indie bands.
The story of her involvement with Future Sound of London and The Beloved at the inception of acid house is well-documented, as is her loan-funded move into production and subsequent releases on R&S, Oxygen Music Works and Ninja Tune.
Riz also hosts a monthly radio show on Reel Rebels Radio every second Sunday of the month 3.30pm - 5pm
https://www.mixcloud.com/discover/reel-rebels-radio/