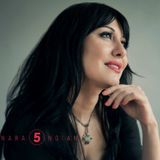 Born in January 1971 in Erevan, Nara took from her 14th, both piano and accompanying lessons at the High Academy of Music "Komitas" and stage interpretation at the High Academy of Dramatic Art of Erevan. An outstanding feat! Even more, she gets the same year, in 1990, a first prize in both academies! 1986 as a comedian in the National Theater of Stanislavsky, Erevan.
1990 She held the supporting role in the movie "Les Maudits", directed by Keussayantz ( Armenfilm).1998 is a significant year for Nara: she plays the leading part in the movie "Nostalgie", directed by Frounsé Dovlatian (studio Armenfilm). She receives the women’s performance first prize at the movie festival of Kouibychev, Russia.Composer, it is only natural to find her on many projects: 2 CD’s of Christian Merveille (1,2,3 piano) in 2000 and « Si c’est comme ça » in 2001, and also a CD sponsored by the Chief Representative of the Children’s Rights, Claude Lelièvre in 2002: « Félicien le magicien » 2003, « Bradyaga »