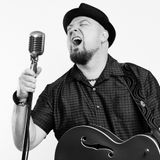 Winner MALE PERFORMER OF THE YEAR in the 2018 New England Music Awards (best in 6 states).

With a sound that is traditional in its inception and modern in execution, Boston based Recording Artist and Film Composer Munk Duane’s style is born of late 60s, early 70s singer-songwriter inspired R&B and Soul, filtered through a 21st century aesthetic.

Munk Duane's music has popped up in hundreds of television and film placements from The 70th Annual Tony Awards, The Late Show With Stephen Colbert, Hawaii Five-O, 60 Minutes, NCIS and Blue Bloods, to HBO's The Sopranos, the 2010 Super Bowl Half Time Show and NCAA March Madness. He composed the original score for the 2015 Indie Thriller "The House Across The Street" staring Eric Roberts and Ethan Embry.

Munk has been featured in major press including Billboard Magazine, The Hollywood Reporter and The Boston Globe.