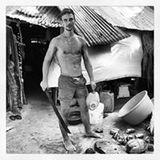 DJ m.scheffler, Michal Scheffler, winner of Miller Soundclash competition, was born and raised in Poland and for his 18th birthday chose to become a citizen of the world. A decade later, DJ Michal (pronounced "Mee-how"), has absorbed cultural influence and experience from around the globe resulting in a fresh, deep and sexy variety of sounds as he switches positions and style throughout his sets. Known for Live Remixing and performances with live instruments, Michal showcases a mix of tech-house and deep nuDISCO & bassline grooves. Inspired by the German roots of Cologne, plus the newest trends in Ibiza, and finely seasoned with touches of latin senHe has exhibited this versatility at clubs in Spain, Portugal, Argentina, Angola and more recently in Rio de Janeiro, Brazil. A new staple in Panama City, he´s broken the ice with residencies at Hard Rock Hotel and clubs throughout the Casco Viejo scene,as he develops new cultural projects in this bridge of the Americas.