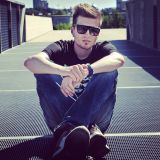 Never miss another
show from Moodbase

Andrew, a perspective artist hiding under the name of Moodbase is a breaks and a radio show dj and producer. who might be know to you as the creator of a many popular mixes. It may sound a bit silly, but it’s a fact that one night with Moodbase’s beats can rock your socks off.

Moodbase started his musical career at the of fourteen and established himself as a standards smashing music pioneer by combining strong rhythms and melodies. And this is not only talk with no game. The base of Moodbase’s sets is a breakbeat with a touch of dubstep, hip-hop and even new-disco. Combine all that and you’ll get Moodbase.

He’s also communicating with famous record companies and DJ’s, creating the soundtracks for many commercial video clips and successfully hosting radio show and performing in the Baltic countries. Everything that has been done until now is just the start. All of the best is still in the future.