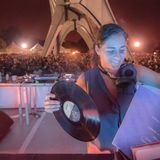 Misstress Barbara (word play between Miss and Stress) is an internationally renowned electronic artist, DJ and Producer, who has performed at some of the world’s top clubs and worked alongside music heavyweights such as Bjork, The Prodigy, Tiesto, Carl Cox, Richie Hawtin and John Digweed just to name a few.

Born as Barbara Bonfiglio in Catania, Italy, she moved with her parents to Montreal when she was 8 years old. Since 1996, her DJing and Productions have earned her accolades and awards, including receiving the highest prize at the 2001 MIMI Awards (Montreal International Music Initiative), the “Best Breakthrough Underground DJ” at the UK Underground Music Awards, a “Best Dance Album Of The Year” nomination at the 2010 JUNO Awards (I’m No Human/ Maple Music Recordings), a “Best Show in foreign language” nomination at 2013 ADISQ for the live show of her recent album”Many Shades of Grey” (Maple Music Recordings) and the award of “Best Montreal DJ” at the 2014 MTL Awards.