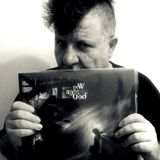 I became active in the Greek punk rock scene in the late 70’s. I founded the bands The Flowers of Romance, Nexus and New Zero God. I opened with my bands for The Sisters of Mercy, The Mission, New Model Army, Christian Death, Andi Sex Gang and The Legendary Pink Dots. I worked with Wayne Hussey. I am an awarded movie director. I was the owner of the independent record label Cyberdelia. I played in Greek and English movies and documentaries. I released 10 albums so far as well as many singles and EPs.